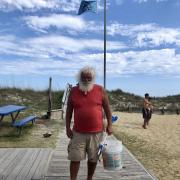 Isle of Palms City Council will honor Howard Hogue – aka Beach Santa – on July 27 with its Signal 30 Award, recognizing Hogue’s efforts to keep the coast clean and draw attention to the litter crisis plaguing beaches, oceans and waterways.

The City of Isle of Palms gives the Signal 30 Award for citizen service on an extremely limited basis, only with approval from City Council. Mayor Jimmy Carroll will officially bestow the award to Hogue at the start of council’s regular meeting at 6 p.m. at City Hall.

“Beach Santa has done an incredible service by helping to keep our island beautiful and protect the coastal ecosystem and public health from pollution. We cannot thank him enough for his astonishing volunteer efforts for our community and our Lowcountry neighbors. He is an inspiration and a great role model.” Carroll said.

From the summer of 2018 through the end of May 2021, Hogue documented collecting more than 55,000 litter and debris items from the Isle of Palms Beach and more than 75,000 items from the streetscape and parking lots in the island’s Front Beach commercial district. That’s a total of 130,000 items of litter picked up from Isle of Palms since he began recording delineated statistics with the assistance of the South Carolina Aquarium’s conservation team and its Litter-free Digital Journal.

A resident of Moncks Corner, Hogue first started collecting litter on Isle of Palms in 2017 as a pastime that helped him stay fit, and because of the uncanny resemblance, he became known as Beach Santa. He began recording litter statistics with the weekly summer trash sweeps organized by Isle of Palms Cleanup Crew, but has done most of his litter sweeps either on his own or with the assistance of aquarium conservation team member Linda Rowe.

During the pandemic, Hogue expanded his cleanup efforts around the tri-county Charleston region, including many of the area’s boat landings. His astounding count of litter collected in the Lowcountry by the start of summer 2021 totaled 425,445, “and he has done it all with a twinkle in his eye,” noted Isle of Palms City Council Member Susan Hill Smith in her letter of recommendation for the award.

“This kind crusader gladly talks with those on the beach who ask about what he’s doing, ready to share a message for all who will listen about the importance of doing our part to protect the environment and shared public spaces,” wrote Smith, an Isle of Palms Cleanup Crew co-founder.

A goodwill ambassador and local celebrity, Beach Santa has also joined the City’s Isle of Palms Holiday Street Festival in the past, donating his appearance pay to charity, as is his typical practice. He continues to document his sweeps and anticipates exceeding half a million litter items by the end of 2021.

Litter statistics like those catalogued with the South Carolina Aquarium’s conservation team and its Litter-free Digital Journal help inform the public and related policy conversations about the problem. In 2020, the City of Isle of Palms began restricting smoking on the beach and beach access paths, as well as restrictions on bringing the following items to the beach because of the harmful litter they create: single-use retail plastic bags, plastic straws, balloons, and polystyrene (also known as Styrofoam) coolers, cups and food containers.