The Isle of Palms Police Department has twenty-two (22) sworn police officers and seven (7) non-sworn personnel serving a population of approximately 5,000 citizens. The department provides such services as Crime Prevention, Criminal Investigations, Traffic Enforcement, Victim Services, Animal Services and Beach Patrol to those that live, work and visit the Isle of Palms.

Policies and Procedures  of the Isle of Palms Police Department 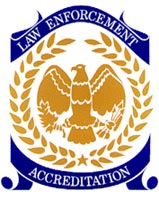 On March 25, 2017 in Mobile, Alabama, the department received its 5th re-accreditation award. During this conference, the department also received a Meritorious Award for being an accredited agency for fifteen consecutive years. Also, Chief Buckhannon was awarded the Egon Bittner Award for being in command of an accredited agency for fifteen or more continuous years. Accreditation represents a significant professional achievement.

Accreditation acknowledges the implementation of policies and procedures that are conceptually sound and operationally effective. The foundation of Accreditation lies in the promulgation of standards containing a clear statement of professional objectives. Participating agencies conduct a thorough self-analysis to determine how existing operations can be adapted to meet these objectives. When the procedures are in place, a team of trained assessors verifies that applicable standards have been successfully implemented. The process culminates with a decision by the CALEA that the agency has met the requirements for Accreditation.